Five Sectors That Are Gaining Traction Amid the Covid Pandemic 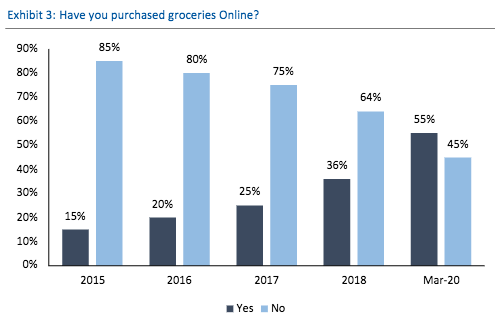 COVID-19 has affected every industry and every sector in some way. While most sectors have been adversely affected, some sectors have gained traction in recent weeks and months. Here are five sectors that have been gaining momentum throughout these challenging times.

As physical distancing has become a reality for most, individuals have looked far and wide for new ways to entertain themselves. Several gaming companies have seen record levels of engagement as people are confined to their homes.

One gaming company that has seen record levels of engagement is Epic Game, which develops the popular Fortnite gaming sensation. As reported by Bloomberg, so many people began playing Fortnite in Italy that it stressed the country’s telecom systems. In a similar vein, Steam, which is a video game digital distribution service by Valve, has recorded a record 20 million users playing the game simultaneously.

The uptick in gaming was especially pronounced in China. As reported by CNN, games such as "Honor of Kings," "Playerunknown's Battlegrounds" and "League of Legends" were twice as popular during the 2020 Lunar New Year as compared to the Lunar New Year in 2019.

Amidst tremendous uncertainty, there have been some certainties regarding human behavior. For one, we all need to eat. After the CDC announced that there was no evidence that COVID-19 could be spread via food, many food delivery and meal kit companies gained unprecedented traction. Blue Apron, for example, which has struggled over the last year, has suddenly seen new light over the past few months.  Additionally, Uber just purchased Postmates for $2.65 Billion in stock. The takeover allows Uber Eats to be more competitive with leader DoorDash.

A recent analysis from RBC Capital Markets stated that Amazon’s online grocery arm may produce $70 billion in gross merchandise volume by 2023, which represents more than 3X growth from 2019. As RBC analyst Mark Mahaney explained, “We view Amazon as one of the largest structural beneficiaries of this accelerated secular shift to online grocery shopping, along with Walmart and Instacart”.

As the US acclimatized to physical distancing, many individuals looked for new ways to exercise and stay fit while at home. Unable to go to a gym to exercise, many people turned to at-home workout systems.

Peloton is one of several at-home fitness devices that has gained traction of late. The company reported a 66% increase in sales in its most recent quarter. But Peloton and some of the more well-known brands are certainly not the only fitness startups that may gain traction during these times. Tonal—a connected strength training machine that is considered the Peloton for strength training—has also gained a strong new following. The company has seen its sales triple.

Recently, Lululemon Athletica spent half a billion dollars to buy at-home workout startup Mirror. The deal enables Lululemon to engage with consumers in a new way and leaning on the hot at-home fitness trend, which may last longer if gyms remain closed.

COVID-19 has accelerated the transition to telemedicine. In March, the US Department of Health and Human Services eased constraints that made it very difficult for individuals to meet digitally with a doctor due to the Health Insurance Portability and Accountability Act’s (HIPAA) privacy concerns.

Several telemedicine startups have gained traction in recent weeks and months. Doctor On Demand—a platform that offers on-demand 24/7 visits with US-licensed healthcare providers—is one such startup. Hill Ferguson, the CEO of Doctor On Demand, has explained the motivation behind Doctor On Demand, “When you look at the data…about 30 percent of adults don’t have a primary care physician. 50 percent of millennials don’t and that trend is growing.”

Another promising startup pushing the future of telemedicine is San Francisco-based Lemonaid Health. Users can use the app to connect to a doctor or nurse practitioner. Dr. Davis Lui, the chief clinical officer for Lemonaid Health, has explained, "What it really does is break away all those barriers to see a doctor...I think what coronavirus is demonstrating is that there's a way to provide care that's convenient, affordable, and accessible in a way that most Americans haven't thought of until now.”

The stress of the current environment has called new attention to mental health apps and devices. Not only has there been considerable fear about succumbing to or transmitting the virus, but there has also been a lot of anxiety tied to isolation. Understandably, several mental health apps are in high-demand and have experienced unprecedented growth during these times.

One mental health app seeing growth in activity is Headspace, a mindfulness company that provides meditation activities for users via its website and app. Since the COVID-19 outbreak, Headspace has launched a free set of meditations called “Weathering the Storm,” made specifically for dealing with the crisis. As reported by MIT Technology Review, Headspace’s chief science officer, Megan Jones Bell, has reported the number of users looking for specific content on stress has doubled.

How To Perfect Your Home Office