Corporate Venture Capital (CVC) has undergone an exciting revolution in recent months and years.  Large corporate machines are trying to keep pace with innovation. No company or industry is safe from disruption. The Davids are eager to overthrow the Goliaths. And many Goliaths have reached the conclusion that collaboration and partnership is more effective than head-on competition.


The most successful corporate venture capital arms have a relentless focus on a particular area of expertise. They have deep expertise and a nuanced understanding of a specific domain that allows them to assert a competitive advantage. This not only helps them identify the most promising investments, but it also enables them to add value to startups in the form of deep industry expertise.

Consider Qualcomm Ventures, the third most active corporate venture capital arm in 2017. Qualcomm focuses primarily on deep tech, including AI, robotics, and mixed reality. Varun Jain, leader of Qualcomm’s early-stage investment efforts, explains, “We have a very nuanced understanding of deep-tech businesses given that we’ve made 140+ such investments all over the world.”


While corporate venture capital arms must be strongly connected to the parent company, the most successful ones operate as a separate and independent entity. This allows them to be nimble and operate with a high tolerance for risk. Google Ventures, for example, is based on Google’s main campus, but in separate buildings. The strategy has paid dividends. Google Ventures was the most active CVC investor in 2017.


Qualcomm Ventures, for example, tends to make a formal investment decision in the span of two to three weeks. Jain explains, “We have a very quick investment approval process in general and particularly so for early-stage deals. Qualcomm also hustles to win important deals. “We don’t wait for validation from a financial investor to make our decision. If we feel strongly about an opportunity and think we can add value, we’ll step up and price the round.”


In order to scale deal flow, corporate venture capital arms need to be firmly implanted into their relevant startup ecosystem. They need to be effective networkers and develop strong relationships with key partners. Consider, for example, JetBlue Ventures (JTV). While JetBlue Airways is based in New York, JTV is strategically based in the Silicon Valley region, considered by many to be the epicenter of tech innovation.


In order to scale its network, JTV has partnered with various accelerators and incubators, including 500Startups, Plug and Play Tech Center, and Rocketpace. It also forges strong relationships with industry-relevant organizations, including Travel Tech Con, a community dedicated to emerging travel tech and Future Travel Experience, an organization dedicated to optimizing the end-to-end passenger experience. In February 2018, Bonny Simi, President of JTV, explained, “These relationships and more have helped our team gain exposure to over 2,000 start-ups since our inception in February 2016, and we have invested in an ever-growing number (16 as of today).”


One of the most compelling reasons for taking CVC money is the opportunity to get deep industry expertise. Value-added resources allow CVCs to provide a compelling value proposition to startups. In industries such as travel tech that is poorly understood by the traditional venture capital industry, these value-added resources can catapult startups to success. Simi explains, “We have experience working very closely with the regulators on many matters including aircraft certification, safety reviews, air and hotel operations, revenue and loyalty systems and more, so we can help our startups understand and navigate the travel and hospitality industries”. 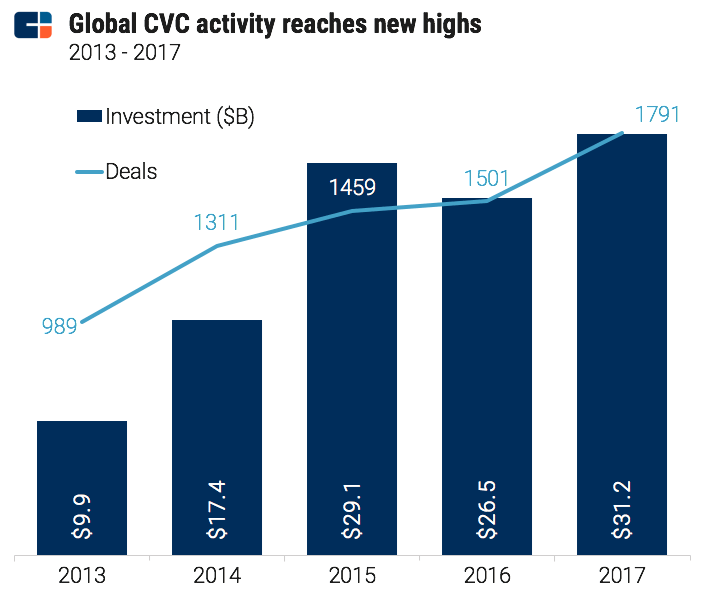 Making Sense of Why Corporate Venture Capital is Booming