Why SPACs Are Heating Up

by Rebecca Hinds
Posted in Investment Banking in

The history of venture capital is punctuated by examples of various investment vehicles reinventing themselves over time. One recent example of a reinvention is special purpose acquisition companies or SPACs. While SPACs have been around for decades, only recently have they attracted the interest of investors. Far from their lackluster reputation as penny-stock frauds in the 1980s, SPACs are now considered “the topic du jour in Silicon Valley” and beyond. As Bill Gurley, who has spent over 15 years as a General Partner at Benchmark Capital, recently explained, “SPACs are all the rage, and everybody and their brother have either raised one or are talking about raising one."

SPACs are considered to be “blank check” acquisition funds. They are intended to enable companies to go public without pursuing the traditional IPO route. The primary purpose of SPACs is to facilitate the merging or acquisition of other companies—SPACs do not have any commercial operations.

SPACs are typically formed by investors who have some expertise in a particular industry and want to pursue a deal in that area. While investors may have a particular target acquisition in mind when forming a SPAC, they don’t disclose this target throughout the IPO process. The result is that IPO investors don’t know which companies they’ll ultimately be investing in. The money that is raised via the IPO is stored in an interest-bearing account and cannot be used for any other purpose than to pursue an acquisition or return money to investors. If unable to complete an acquisition within two years, a SPAC typically must return its funds to its investors. The unit price for SPACs is typically $10.

The rise of SPACs

According to Silicon Valley investor and Sacramento Kings Owner, Vivek Ranadive, SPACs are capturing the “greatest wealth creation opportunity in history.” Indeed, SPACs have experienced unprecedented growth in recent years. Without a doubt, Covid-19 has contributed to the rise of SPACs. Higher market volatility has given rise to increased interest in acquiring distressed companies.

According to The New York Times, SPACs have raised more than $30 billion thus far in 2020, as compared to $13 billion in all of 2019. The third quarter of 2020 has been an especially promising period for SPACs. According to Bloomberg Law, SPACs have been “hotter than hot”. In particular, SPAC IPOs have raised $32.1 billion on 81 deals, as compared to $32.9 billion on 92 deals for traditional IPOs. Banks such as Credit Suisse, Citi, and Goldman Sachs have gravitated towards SPACs and now consider them fundamental to their operations. Companies such as electric-truck company Nikola, fantasy sports company DraftKings, and Virgin Galactic have all opted to pursue SPACs. 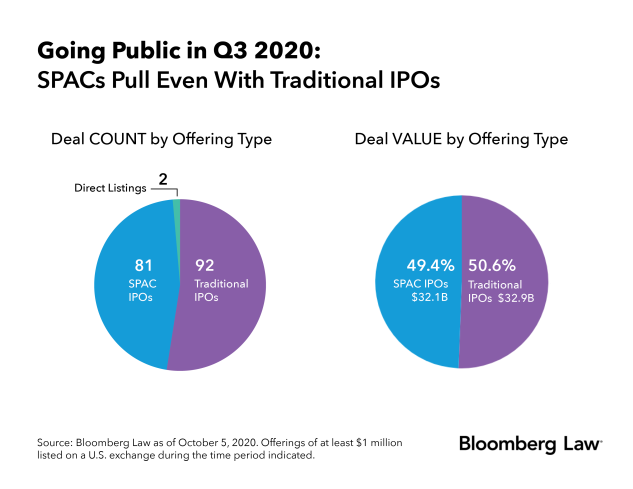 Why have SPACs risen in popularity of late? According to Albert Vanderlaan, an attorney at global law firm, Orrick, SPACs have “already gone through their junk phase.” But that’s not the only reason they are gaining unprecedented positive interest. According to Burley, one major driver is the “structurally broken IPO process.” He’s explained, “The traditional way of going public is systematically broken and is robbing Silicon Valley founders, employees, and investors of billions of dollars each year.” Burley outlines two primary “fatal laws” associated with IPOs.

What about Direct Listings?

Direct Listings have proven to be lucrative alternatives to IPOs in recent years with companies such as Spotify and Asana opting to pursue Direct Listings. A key question is what advantages do SPACs offer over Direct Listings?

One advantage is flexibility. Almost every term in a SPAC is up for negotiation. As Burley explains, SPACs can be likened to a “choose your own adventure” experience. Additionally, SPACs are typically much faster tracks to IPO as compared to Direct Listings. As Burley explains, “with a SPAC you could be public in two-months from when you start the process”, as compared to at least six months for a typical Direct Listing. Relatedly, SPACs require fewer disclosures and scrutiny, also contributing to a faster path to IPO.

But SPACs are not without risks. As three-time CEO and founder of Baja Ventures, Betsy Atkins, explains, there are important questions that need to be asked when evaluating the potential of a SPAC. These include:

Jumping on to the SPAC trend just because it is popular may not be the best choice and practice so it is imperative to make sure that their goals and practices are in line with your company’s.

How Venture Capital is Responding to the Coronavirus