Find the latest insights for finance and investment professionals all in one place. Check out our new Resources page.

It’s well known that there’s a pervasive gender gap in venture capital. Not only are women underrepresented in venture capital in terms of the number of women-founded companies, but they are also underrepresented when it comes to leadership positions in the industry. While there’s been some progress in recent years—female CEOs secured about 14% of all VC investment in the US in 2019, compared to … ... END_OF_DOCUMENT_TOKEN_TO_BE_REPLACED

The Rise of Family Office Direct and Co-Investing

Family offices have been on the rise for many years. Yet, as is the case of many investment structures, family offices have undergone a series of changes in recent years. Two trends in particular—the rise of direct investing and co-investing—have commanded a lot of attention recently.

Family offices have been able to invest directly in private companies (as opposed to investing through a fund structure) for decades. Yet the strategy has only become prominent in recent years. The early 2010s were a key inflection point. During the five-year time period spanning 2010 and 2015, direct investment activity among family offices grew by a staggering 206%—and the growth has continued ever since—according to a study by Fintrx, a Boston-based data and research firm. 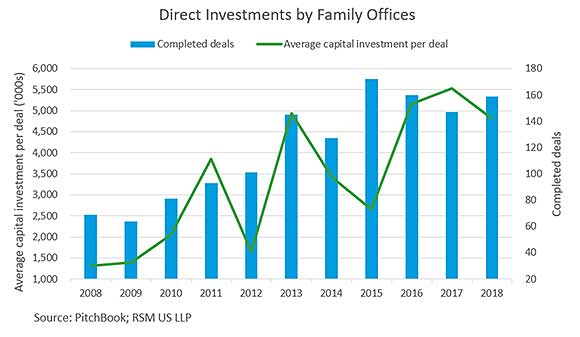 Why are family offices increasingly gravitating toward direct investing? According to Francois Botha, a strategy consultant, the growth in direct investments by family offices “can be attributed to several factors including the accumulation of assets and talent required to effect such investments on the single family office's behalf, more robust networks, as well as the greater control and decision-making ability, as well as better value and interest alignment and returns that these deals afford.”

The rise of family office club and co-investing

In addition to direct investments, family offices have also been increasing their club investing and co-investing activity. While the terms “club investing” and “co-investment” are often considered synonymous, there are notable differences. Club deals are typically investments made by multiple investors, wherein each of the club “members” contributes capital to the deal. Unlike co-investments, the structure of the deal tends to vary according to several factors with the group members often agreeing to terms in advance of the transaction. Co-investments, on the other hand, typically have a distinct principal investor who takes the lead and tends to incentivize other secondary investors to invest due, in part, to their expertise. Co-investments can refer to a family office investment alongside another family or a private equity fund.

Co-investing with other 'like-minded' family offices and organizations is often the solution to overcoming several in-house issues ranging from inadequate resources to family conflict. Boasting a host of benefits from the pooling of resources to gain access to higher-value deals and transactions, more formalized structures, and governance disciplines, benefiting from others' expertise and experience while reducing costs, broader diversification, and better risk management, among others.

Relationship intelligence is key to club and co-investing success. The better able family offices are to understand how to leverage and strengthen their connections, the more likely that the outcome of the co-investment will be favorable. As Both has explained:

These stronger, more diverse connections facilitate networking and information-sharing amongst larger numbers of family offices. This, in turn, helps those involved to diversify their investments and leverage each other's deal flow.

While family offices have been around for years, they have shown remarkable transformation in recent years as direct investing and co-investing have become more prevalent. And they’ve also shown resiliency. According to Dr. Rebecca Gooch, Director of Research at Campden Family Wealth, many family offices are "demonstrating their strength as nimble, responsive, and patient investors, often with cash reserves to carry them through turbulent times."

An AI-Powered CRM is Vital for a Family Office