Venture capital is often referred to as an apprenticeship business because so much important learning comes from day-to-day experiences. Yet, as an article published by the Business Development Bank of Canada (BDC) explains, you can shortcut the learning process by learning from experts: “Your learning curve can be shorter—and your results better—if you learn from pros who’ve already mastered key … ... END_OF_DOCUMENT_TOKEN_TO_BE_REPLACED

ClimateTech is Turning Heads in Venture Capital. Here’s What You Should Know.

Climate change has attracted widespread public interest and concern over the past few years—and for good reason. According to research by NOAA and NASA, the 2010 to 2019 decade was the hottest decade since record keeping commenced 140 years ago. 2019 was an especially noteworthy year—it was the second hottest year on record and saw the highest ever ocean temperatures.

Venture capital has responded to climate change interest and concern by doubling down on “ClimateTech” Several investors and media outlet have dubbed climate tech “the new cleantech”. Sequoia is one of many venture capital firms that has publicly expressed interest in climate tech. A recent Tweet by Bryan Schreier, a partner at Sequoia Capital who focuses on seed and Series A companies emphasized the business opportunity associated with ClimateTech, and solicited suggestions on promising ClimateTech entrepreneurs. 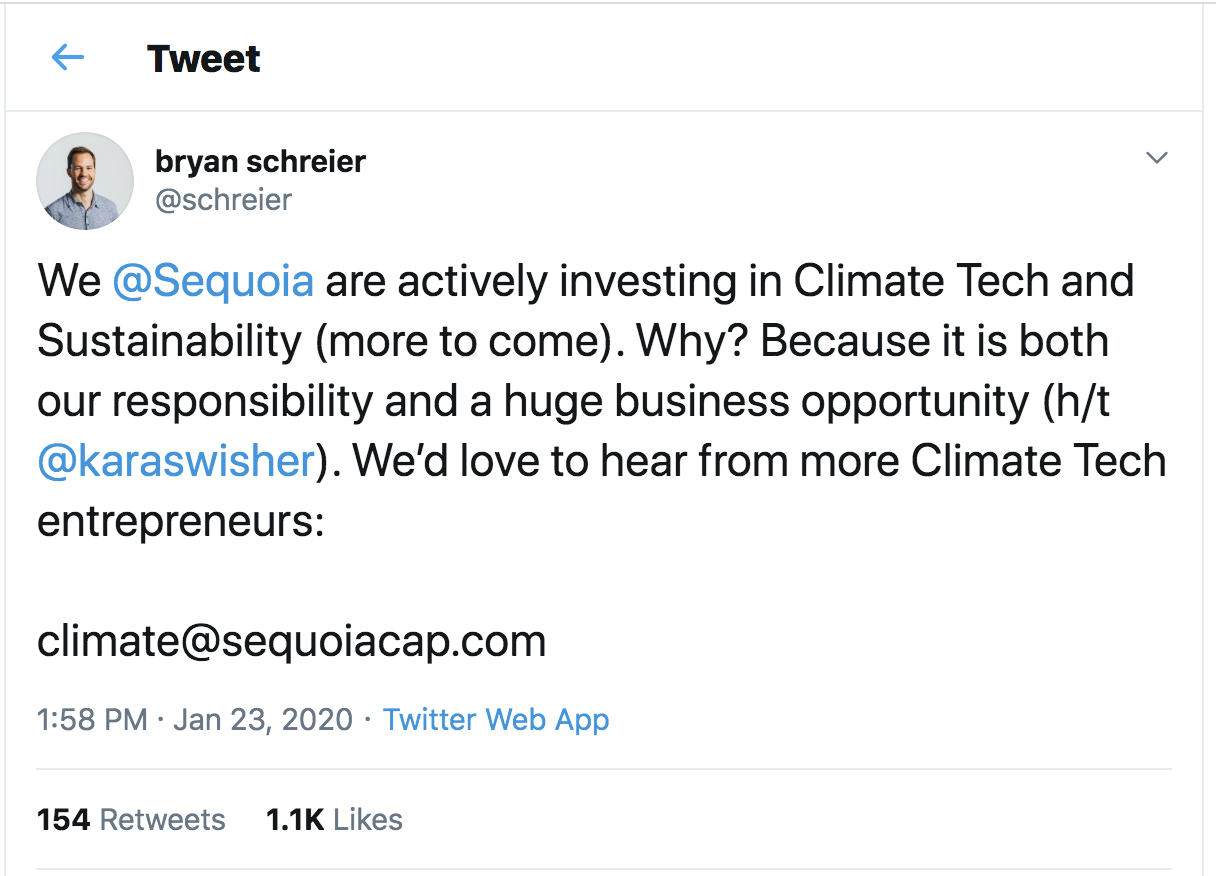 Much like cleantech, ClimateTech is a broad, umbrella term. How should we think about this new investment category? Joyce Coffee, founder and President of Climate Resilience Consulting, provides some valuable direction. In particular, she has delineated three ClimateTech categories:

How do we reduce our exposure and dependence on oil? How do we develop and leverage energy sources and technologies in the service of a more sustainable future? Companies such as Sierra Energy, based in Davis, California, is one promising company in this category. Sierra Energy is a waste-to-energy gasification company. Its flagship product, its FastOx gasification system, promises to transform nearly any type of trash into clean energy without burning.

Data and analytics are disrupting and advancing how we understand climate change and other climate-related concerns. One company making big waves in climate risk analytics is Jupiter. Jupiter builds artificial intelligence-powered tools that enable decision-makers to predict and manage risk associated with climate change. The company has already received funding from the National Science Foundation and NASA and attracted clients such as the cities of New York and Miami.

A statement by Jupiter CEO, Rich Sorkin, puts the opportunity into perspective. He explains,

“If you were a major corporation 10 years ago and somebody said ‘cyber risk,’ chances were a lot of people would say, ‘What’s that?’ Now every large entity on the planet, business, financial services, governments, they are managing to cyber risks. It’s just a fundamental part of their business,” Sorkin said. “And the same thing will be true with risk from severe weather, accounting for the climate change that’s already occurred and is inevitably coming over the next several years as well.”

While Coffee acknowledges that agriculture-focused ClimateTech startups could fall under “AgTech”, she duly notes that “such precision agriculture products as software management, data analytics, water efficiency and seed innovations are closely related to climate change.” Inevitably, agriculture-related innovations will fall under the ClimateTech category. One company disrupting this domain is Indigo Ag. The Boston-based company produces microbial and digital technologies that seek to improve yields of cotton, corn, soybeans, rice, and other crops

Until recently, ClimateTech has been largely overlooked by venture capitalists. As Scott Kupor, managing partner at Andreessen Horowitz, has said, “It’s not an area we’ve spent a lot of time in.” To be sure, many investors have battle wounds that make them hesitant to invest in ClimateTech. As Kupor explains, many investors invested in solar and other renewable energy technology a decade ago and lost a lot of money as a result.

“It’s heartbreaking as an investor because it’s an area where we’d all like to be much more active, but it’s not obvious what a large check would do that would generate a return within the time horizon of a venture fund, which is less than 10 years.”

Is ClimateTech really the new cleantech? The jury is still out. While the potential of ClimateTech looms large for venture capital, so too do the associated risks. It’s not yet clear how ClimateTech will disrupt venture capital. What is clear is that the next few years will be defining ones for ClimateTech’s future.