It’s hard to envision 2021 being afflicted by as much change as 2020. But continued change is all but inevitable—especially in the venture capital arena. Here are four trends from top venture capitalists that are slated to define 2021.

1. Bay Area deals as a proportion of total US VC deals will decline

According to a recent report from Pitchbook, Bay Area deals may fall below 20% of deal count for the first time ever. As the report highlights, the Bay Area’s proportion of total venture capital deal count activity has declined since 2006. The report predicts that the COVID-19 pandemic and the exodus from the Bay Area will only accelerate this trend. San Francisco's office vacancy rate has skyrocketed to 14%, the highest ever since 2011. Company juggernauts such as Oracle, HPE, and Tesla have all recently announced that they will be moving the headquarters to Texas. And some VCs are following suit too. Joe Lonsdale has announced that he is moving the headquarters of 8VC, his venture firm, from San Francisco to Austin.

But the extent of the exodus from the Bay Area is yet to be seen. Some like Keith Rabois, general partner at Founders Fund, believe that it is justified. In a recent Tweet he said, “If you’re an entrepreneur, it is probably easier to raise a VC round in Miami right now than CA.” Others aren’t buying into the trend. In a recent Tweet, Airbnb CEO Brian Chesky said, “Airbnb is staying in California and I’m staying in California. This is a special place.”

Indeed, there are several important realities that prove the Bay Area will continue to be a leading locale for venture capital investment. The academic institutions that have been key to the rise of Silicon Valley—Stanford, University of California San Francisco, and University of California Berkeley, for example—aren’t going anywhere.  As well, as reported by Crunchbase, the U.S. companies that launched the most valuable IPOs of the year—Airbnb, DoorDash and Snowflake–are still headquartered in Northern California. 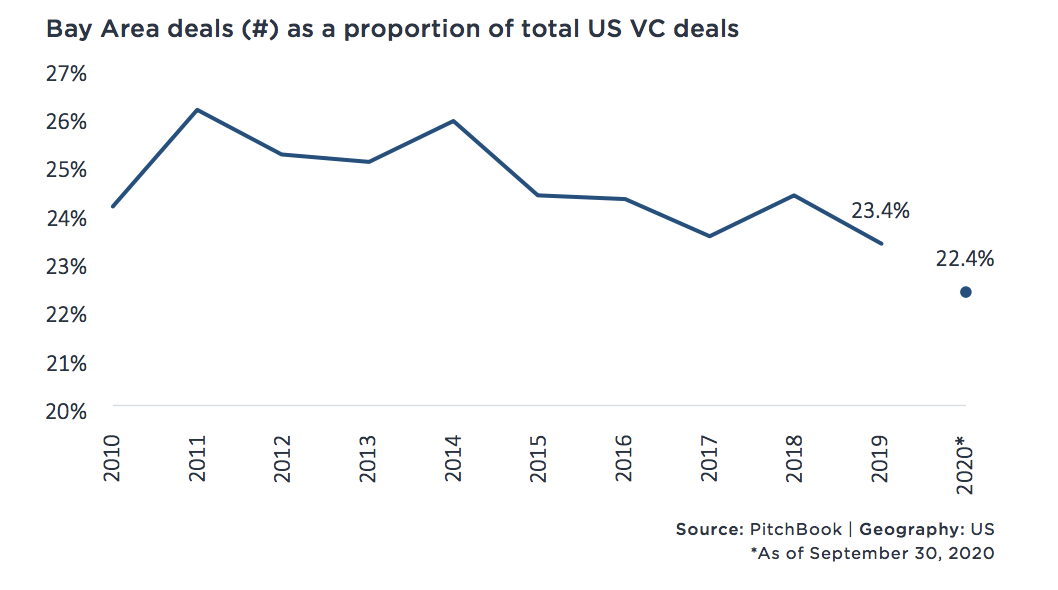 For years, the commercial real estate market was rather resistant to new technologies. However, in recent years, the market has experienced a lot of growth and revitalization. 2018 was a key inflection point. Investment in the “proptech” sector climbed to approximately $20B in 2018, representing a 38% increase over 2017 levels.

While the housing market will almost certainly take some time to rebound after the pandemic, many expect proptech investments to be strong in 2021. Blumberg Capital, an early-stage venture capital firm based in San Francisco, predicts that we’ll see a rise in proptech in 2021. It explains,

The housing market will not revert back to where it was pre-pandemic. In 2021, we will continue to see a shift away from urban centers to suburbs and rural areas, as some people become reluctant to live and work in expensive, dense cities with rising crime rates. We will see a proptech expansion – rather than recession – as owners try to reduce costs and increase operating efficiencies while consumers, hunkered down, invest more in their homes, which have become the new office.

Fifth Wall, a Los Angeles-based venture capital firm that has backed companies such as Opendoor and States Title, is one firm eyeing the proptech market in 2021, both inside the US, as well as in Europe. It is currently raising a $118 million European fund to invest in proptech startups. Roelof Opperman, a managing director at Fifth Wall, has explained,

We believe the European proptech market is underpenetrated and has significant room to grow.

Founders and venture capitalists have long relied on conferences and other in-person events to connect and scout out new investment opportunities. But, in 2021, it’s likely that many of those events won’t be happening in-person. With that restriction comes opportunity. Many venture capitalists are recognizing that they will need to build their brand in new and innovative ways in 2021.

Maren Thomas Bannon, Co-founder and Partner at early-stage venture fund, January Ventures, predicts that “personal brand will become the most sought after new superpower in tech”. She explains,

Investors have to rely more on online channels. This means brand, word of mouth and community matter more. Getting in front of founders through content, social media, virtual events is more important than ever. Marketing and community are the new VC superpowers for creating a deal flow engine.

But it’s not just investors who need to think carefully about their personal brands. So, too, do founders, according to Maren. She explains:

The same is true for early stage founders. When we’re all stuck in our houses, online visibility has never been more important. This trend will continue long after the pandemic ends.

The API model of delivering a product had an incredible year in 2020 and there seems to be ample opportunity for new players in the space. TechCrunch took note of a bunch of funding rounds for API-powered startups earlier this year. “API-driven businesses enable low-code implementations and give superpowers to junior developers or people who don’t consider themselves developers at all,” said Lee Edwards of Root Ventures to TechCrunch.

When asked what market is ripe for API disruption, Issac Roth of Shasta Ventures said,

"An under-appreciated opportunity is in HR and corporate finance where monolithic applications integrate many functionalities that could benefit from evolving separately and could be knit together by each enterprise in a manner that is oriented toward their unique needs."

Investors also say that SaaS software will remain hot in 2021. the pandemic changed how people work and many became more reliant on technology to bridge the physical gaps of separation. Systems of record have taken a new priority for documenting and communicating amongst remote teams. “I think one thing that’s very interesting is historically, a lot of the value resided in systems of record,” said Mark Sherman, managing director at Telstra Ventures.

2020 was a year of constant change. It’s likely that change will continue to be the norm in 2021. Fortunately, venture capital is accustomed to change and is well poised to capitalize on emergent trends to fuel innovation and growth.