Webinar: How the pandemic is raising the bar in the secondary market — Register here

The Opportunities—and Challenges—of A Post-Pandemic Office

Covid-19 has forever changed the state of work.  Perhaps the most profound change relates to office layouts. There’s no denying that the workplace will look different after the pandemic than it did before. And there’s been a lot of speculation about what thephysical office will look like in a post-pandemic world. In the past few weeks, we’ve gained a little more clarity on what to expect. Here’s … ... END_OF_DOCUMENT_TOKEN_TO_BE_REPLACED

Over the past few months, investors and entrepreneurs have needed to adapt in unprecedented ways to a new way of work. One of the key questions that is top of mind for entrepreneurs is “Are venture capital firms still signing checks?” 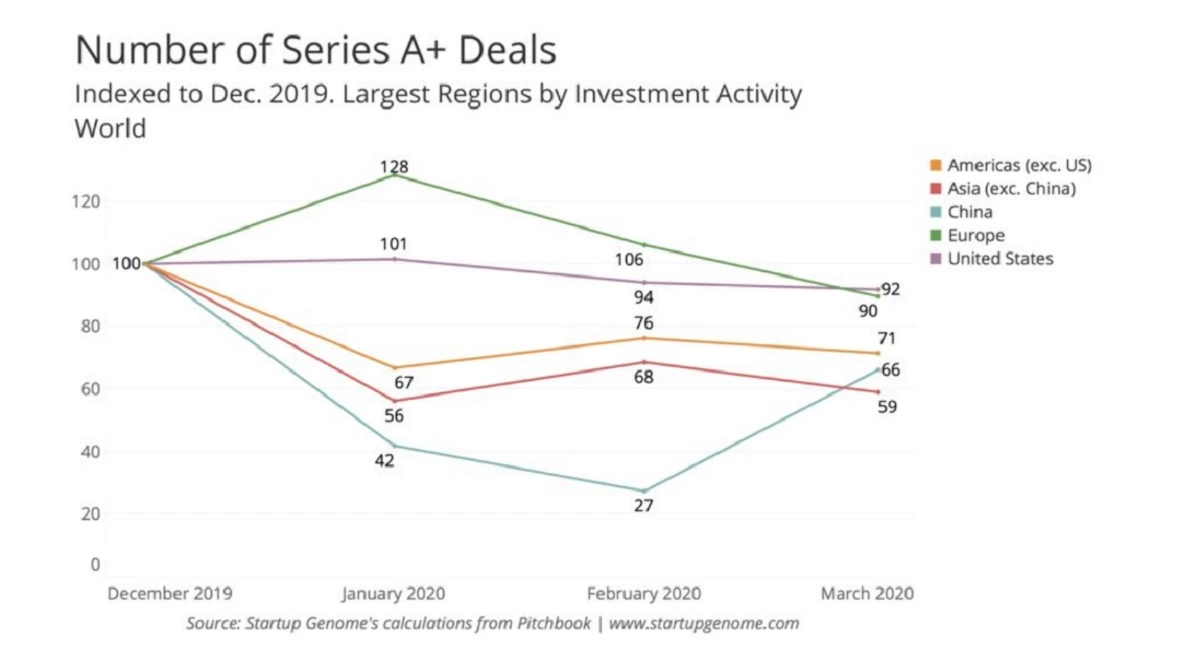 While the venture capital landscape might not be as active as compared to a year ago, deals are still happening. Top-tier venture capitalists recognize the importance of adopting a long-term perspective. They also recognize the value of adopting a contrarian view. The logic is simple—if you opt for conventional behavior and follow the crowd, you can expect conventional performance. If, however, you’re keen to differentiate yourself from the masses and see above-average performance, you need to adopt a contrarian view. This is your best shot at achieving unconventional above-average returns. Indeed, Howard Marks, co-founder and co-chairman of Oaktree Capital Management—the largest investor in distressed securities worldwide, recently explained,

To be a superior investor…you have to deviate from the behavior of the crowd. You have to do things that are different from what they're doing…We have to try to do what's called contrarian behavior.

Recently, Venture Beat surveyed more than 150 venture capital forms globally in order to find out how venture capital firms have adjusted to a remote working environment. The results were illuminating. 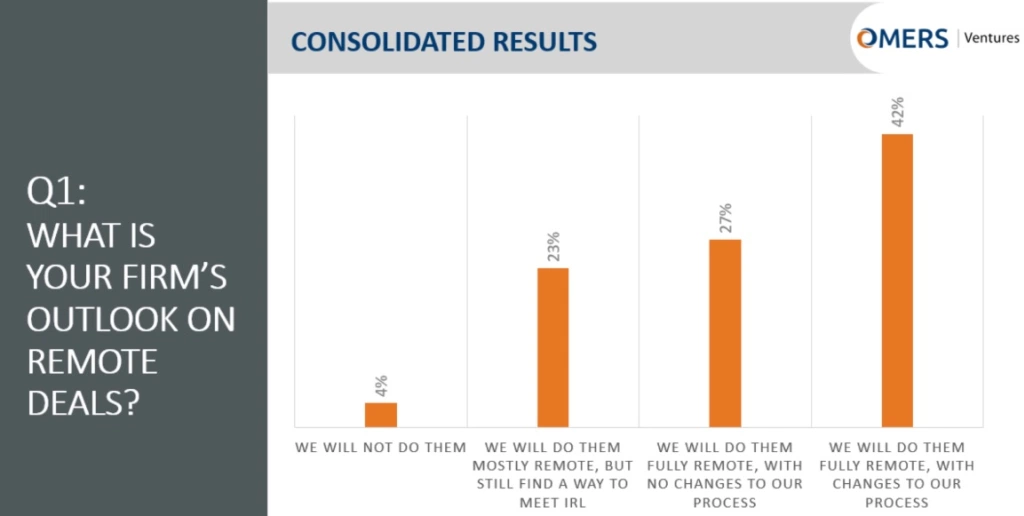 Doubling down on reference calls and due diligence

Due diligence can be tricky and time-consuming, especially for new startups and first-time founders that don’t have a track record of success. According to research by UKBAA, investors who devote at least 20 hours to the due diligence process see a positive impact on the likelihood of a multiple investment return.

What does effective due diligence look like? Many top-tier investors prioritize conversation with customers. Sonja Perkins, the founder of Broadway Angels, an all-women angel/VC group, has explained, “The number-one indication of the company being successful or not is its customers. That’s where I start with due diligence”.

Talking with customers is a telling and informative way to conduct due diligence. As part of her tried-and-true due diligence process, Perkins interviews several existing and prospective customers and asks three questions:

If customers are “dying to have the solution”, Perkins is much more confident that the prospective investment has legs.

Top-tier investors also recruit experts that are better able to evaluate an (especially technical) product. They also search near and far for potential references. A number of Affinity’s clients leverage relationship intelligence to identify the individuals who haven’t been included on the reference lists but are in a good position to provide feedback.  Affinity’s Alliance feature allows you to understand your network's true connections to fast-track reference calls, without sacrificing quality. 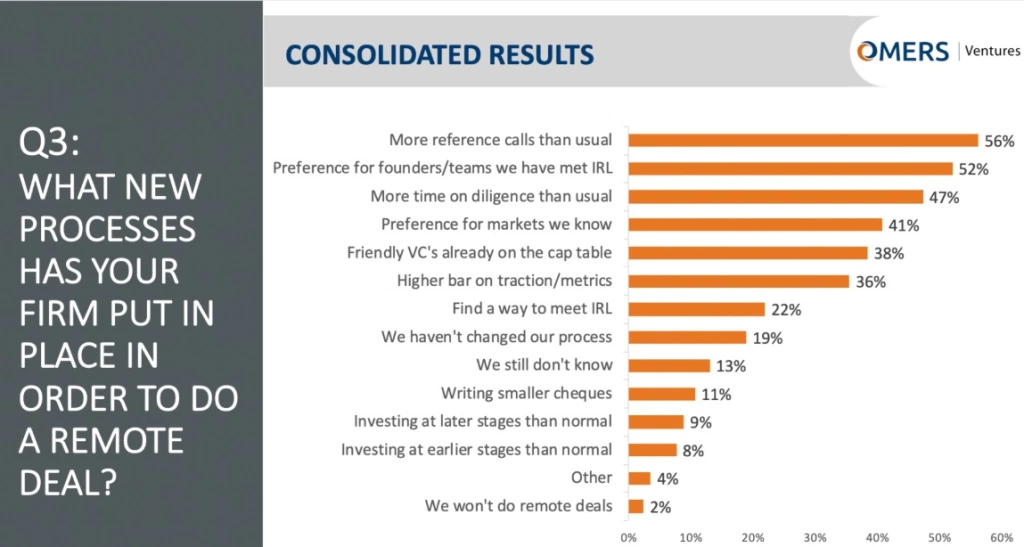 Perhaps not surprisingly, during these uncertain and challenging times, venture capitalists are spending more time on their portfolio companies. 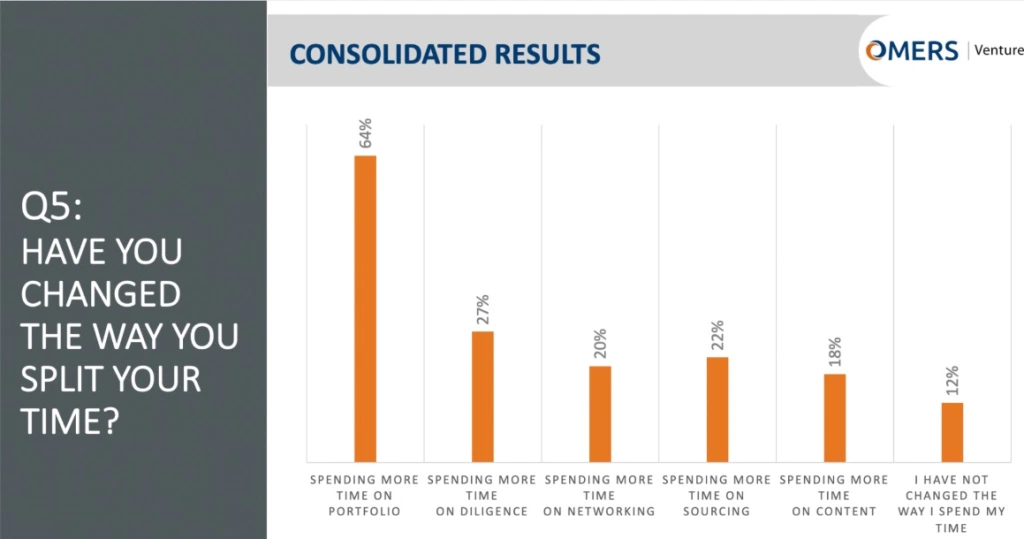 The best venture capitalists is helping their portfolio companies navigate rough waters, especially when it comes to making swift, difficult decisions. Kira Noodleman of Bee Partners, for example, has urged her portfolio companies to “be swift and judicious”. She’s explained,

We are doubling down on portfolio support, with the assumption of a recession as the base case. Be swift and judicious with any opportunity to extend burn at the moment. Hiring cuts should be considered very carefully; if they are needed, a proactive approach is ideal and will feel uncomfortable.

Top venture capitalists are also reminding their portfolio companies of the importance of relationship building and maintenance during these times. Phil Dur, PeakSpan Capital has advised his portfolio companies to “keep your friends close”. He’s explained,

In an environment like this, it’s critical to maintain strong relationships with your key customers, partners, and employees. Have a thoughtful plan of engagement for each of these key stakeholder groups.

With Affinity, you can set automated triggers and reminders to ensure that you don’t drop the ball on important relationships. Keeping tabs on your relationships and ensuring that they remain strong during these difficult times will pay dividends down the road.  As Dur put it,

It’s never more important than in times of crisis for your partners to feel like you have their back and are there to support them. Investing in this now creatively and with authentic engagement and energy will pay enormous dividends in the future.

Events are Canceled. Here Are the Tactics Top Firms Are Using Instead
How to Show Up Smarter To Every Meeting