5 Takeaways from Tech Leaders About an Evolving Silicon Valley

While talk of a potential exodus from the San Francisco Bay Area has been around for years, it used to mean walking away from high-paying, prestigious jobs. With recent Silicon Valley tech companies giving their employees permission to leave and work remotely for months—or permanently—due to COVID-19, many are wondering what the impact will be on the Bay Area’s financial real estate market.

Recently, three real estate fintech leaders discussed the current state of the Bay Area real estate market and their lessons for building businesses on Harry Stebbings’ newest episode of The 20 Minute VC. Stebbings was joined by:

Founder & CEO of Hippo Insurance.  Hippo’s commitment is to make homeowners more secure so that they can enjoy their lives. Hippo has closed over $700M in funding.

Founder & CEO of States Title who is working to eliminate the expense and frustration of closing a mortgage. States Title has closed $229M in funding.

Here are some of the top takeaways from the episode:

The Bay Area is the ultimate networking hub

There is no consensus as to whether the San Francisco Bay Area will ever be the same after the pandemic. However, both Wand and Simkoff shared that the power of the networking effect in the Bay Area cannot be under-estimated.

No doubt, part of the power of the networking effect is driven by academic institutions. Universities like Stanford and the University of California at Berkeley have driven the rise of Silicon Valley for decades. Those networking hubs aren’t going anywhere.

Some venture capital experts such as Keith Rabois, general partner at Founders Fund, tweeted at the end of 2020: “If you’re an entrepreneur, it is probably easier to raise a VC round in Miami right now than CA.” 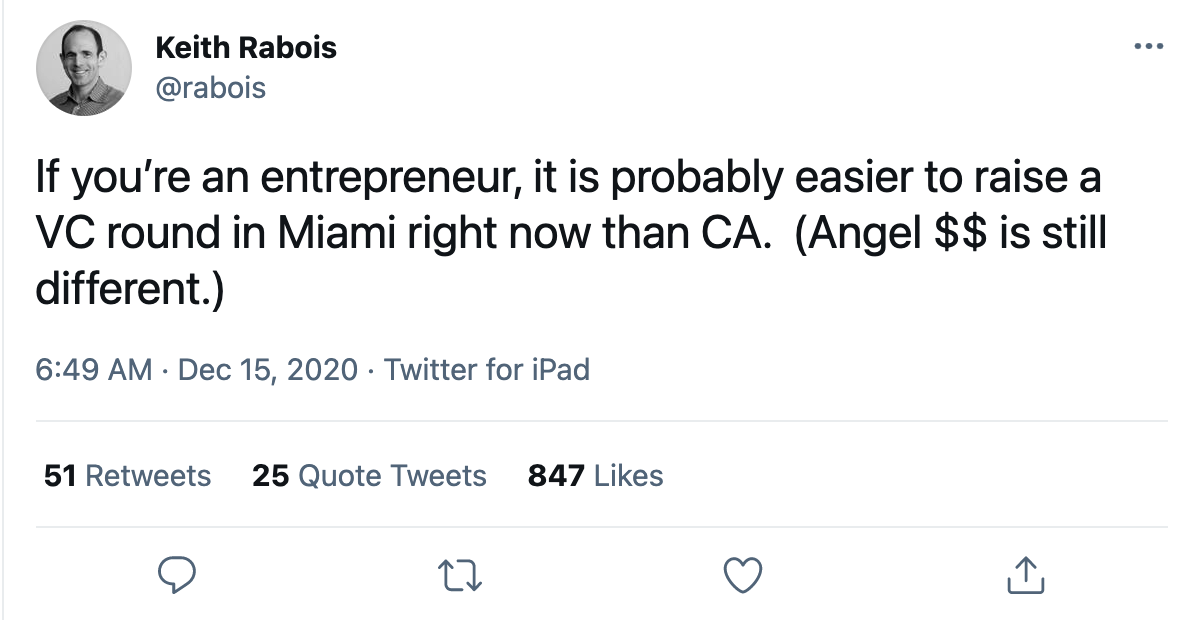 At this point, a complete shift out of California isn’t entirely sustainable. When it comes to top talent, and having access to mentoring and networking opportunities, these experts believed that the Bay Area still has a leg up.

The cost of living and remote working is critical

Ghamsari, who has spent seventeen years in the Bay Area, noted that new grads in the Bay Area are compensated well but still struggle to find a place to live comfortably in the area. Given that the cost of living is high, it’s natural to ask what the best location is when scaling a company.

Ghamsari described how the significant, recent growth in supporting remote work has meant that individuals can work as effectively as they have, anywhere in the world. In fact, some believe office space may even become a perk, rather than the standard. This view translated to his bold perception that “San [Francisco] and California is [sic] going to take a huge hit”.

Leadership has changed and communication styles have pivoted

Wand spoke of leadership and the impact recent changes have had on his personal style. In his opinion, the following areas are most affected by a shift to remote work:

In speaking on this topic, Simkoff referenced what he learned from Sarah Friar, CEO of Nextdoor, who taught him that in times of crisis, people like to assume that leaders have an entire strategy mapped out. He continues on to say “half the time, you’re winging it”.

Simkoff went on to encourage transparency and open communication. He conducted weekly ‘all hands’ calls with 1,200 employees for three to four months at the height of the pandemic. In his experience, communication lines were reinforced by the transparency that not all the answers are known.

Intimacy is still a challenge

Also making an appearance on the call was Brendan Wallace, partner at Fifth Wall. He described how the most difficult challenge for venture capitalists is building intimacy with founders. Brendan reminded listeners of the challenges of achieving that intimacy, especially when working remotely. One potential step in the right direction is developing a reputation for prioritizing relationships over transactions.

Building a business is never easy

Each of these three leaders emphasized that building a business, regardless of its locations, is not easy. Each recounted challenges their teams have faced recently. Fortunately for us, they offered the following sage words of wisdom: